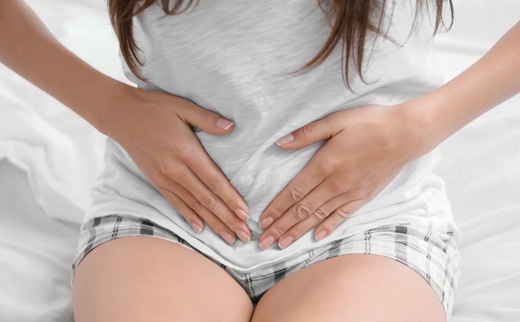 Fibroids (also referred to as leiomyomas or myomas) of the womb (uterus) are the most common pelvic neoplasm in females. They are non-cancerous tumors arising from the smooth muscle cells in or around the womb and vary in size. Fibroids can occur as single or multiple tumors and range in size from microscopic to tens of centimeters. They can remain very small for a long time, grow rapidly, grow slowly over the years or potentially regress (during hypoestrogenic states such as menopause).

Fibroids are clinically apparent in approximately 12 to 25 percent of reproductive-age females and their incidence increases with age. The incidence of fibroids is highest in Black women, who tend to have multiple and larger fibroids, and more symptomatic fibroids at the time of diagnosis. An ultrasound screening study of asymptomatic females aged 18 to 30 found a prevalence of 26 percent in Black females and 7 percent in White females.

Although the cause of uterine fibroids is largely unknown, genetic and epigenetic factors influence the risk of development of uterine fibroids, like age, race and ethnicity, family history, body mass index, early-life environmental exposure to toxins, or vitamin D deficiency.

Fibroids are located in 3 different parts of the uterus:

Although it is the least common type of fibroids, it can prevent pregnancy and cause miscarriage. Bleeding problems are common in these types of fibroids, although sometimes they do not cause any complaints. Bleeding is usually in the form of an increase in menstrual bleeding and a prolongation of its duration.

They are fibroids located in the muscle tissue of the uterine wall. It is the most common type of fibroid. Like submucous fibroids growing towards the inner surface of the uterus, they cause an increase in menstrual bleeding, a prolongation of the menstrual period and related anemia.

At the same time, they can cause problems such as pain in the abdomen and a feeling of fullness as a result of enlargement in the uterus, and frequent urination as a result of pressure on the urinary bladder. Although these fibroids generally do not prevent pregnancy, they can grow during pregnancy and cause undesirable problems in pregnancy such as premature labor pains and pain.

They are fibroids that grow towards the outer surface of the uterus. They cause pressure symptoms such as abdominal pain, back pain, feeling of fullness and frequent urination, constipation. They do not cause bleeding problems. They do not prevent pregnancy, but they can grow during pregnancy, such as intramural fibroids located in the uterine muscle tissue, and may cause undesirable problems during pregnancy such as preterm labor and pain. 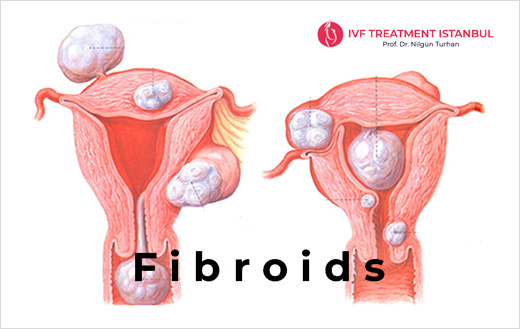 What are the symptoms of fibroids?

The majority of fibroids are small and asymptomatic, many women in at least 50% of afflicted women are unaware they have fibroids because they do not have any symptoms. However, in other women, they cause significant morbidity and affect quality of life and warrant therapy.

These symptoms are related to the number, size, and location of the tumors. Many patients will present with symptoms of menstrual disturbances including menorrhagia, abnormal uterine bleeding, intermenstrual bleeding, dysmenorrhoea and; pelvic pain unrelated to menstruation, pressure or bulk symptoms such as a sensation of bloatedness, increased urinary frequency and bowel disturbance, pain during intercourse and/or pain that warrant treatment. Heavy menstrual bleeding, may lead to anemia, fatigue, or painful periods.

Fibroids may be the sole cause of infertility in 2–3% of women. Depending on their location in the womb, fibroids have been implicated in recurrent pregnancy loss as well as infertility.

The possible effects of fibroids on reproductive functions have been tried to be explained in many ways. Fibroids can cause changes in uterine contractions and blood supply, negatively affect sperm transport and embryo placement in the uterus.

It is also suggested that fibroids disrupt the tight bonds between cells by changing the microvascularity in the uterine muscle wall and affect the formation of regional growth factors necessary for vascularization. It is thought that these changes caused by fibroids may adversely affect the implantation of the embryo to the uterus.

Fibroids that distort the uterine cavity (submucosal or intramural with an intracavitary component) have been thought to result in difficulty conceiving a pregnancy and an increased risk of miscarriage. They are also associated with lower pregnancy, implantation, and delivery rates in women undergoing in vitro fertilization (IVF) compared to infertile women without fibroids.

How is the Diagnosis Made in Fibroids?

The location of the fibroids, their size, and their relationship with the uterine cavity are determined by gynecological examination and ultrasound. Ultrasonography, preferably by the transvaginal route, is the first-line diagnostic imaging procedure for the detection of fibroids.

In addition, tests that support the diagnosis:

Saline Infusion Sonograsy (SIS): After infusion of saline into the uterine cavity, transvaginal ultrasound is able to demonstrate submucosal fibroids and indicate the proximity of intramural fibroids to the cavity.

Hysteroscopy: The inside wall of the uterus is viewed with a hysteroscope, a thin instrument with a camera at the tip.

Hysterosalpingography (HSG-Dye test): It is a special x-ray film. It detects abnormal changes in the shape and size of the uterus and fallopian tubes.

Laparoscopy: The inside of the abdomen, uterus, ovaries and tubes are viewed with the laparoscope, a thin camera inserted through a small incision.

Magnetic resonance imaging (MRI): In cases of ambiguous ultrasound findings, MRI provides additional information. Furthermore, in cases of huge fibroids, or especially in cases of multiple fibroids, when the shadow makes evaluation impossible, there is an indication for MRI.

In which situations the fibroids should be treated in women with infertility?

The treatment decision is primarily depends on the existing clinical symptoms, as well as the size and location of the fibroids. Treatment options for fibroids include surgery, medication, and interventional radiology. The treatment improves symptoms by reducing the size of the fibroids, controlling abnormal uterine bleeding, or even curing the fibroids. Medication may be used to treat abnormal uterine bleeding, although this approach has no more than a transient effect on fibroids.

Submucous fibroids in the inner cavity of the uterus and intramural fibroids distending towards the uterine cavity adversely affect the the success rate of in vitro fertilization and these fibroids must be removed before the treatment or in cases of recurrent abortions.

In contrast, subserosal fibroids do not affect fertility outcomes, and their removal does not confer any benefit.

The indications for treatment should be established with care because the association between infertility and fibroids may not be evident in some situations. Intramural fibroids appear to reduce fertility, but recommendations concerning their treatment remain ambiguous. Indications for surgery in intramural fibroids should be evaluated very carefully because surgery involves removal of the fibroid, but also causes scarring of the uterus wall, which may affect subsequent pregnancies.